Picture Yourself Legend Tripping: Your Complete Guide to Finding UFOs, Monsters, Ghosts, and Urban Legends in Your Own Back Yard 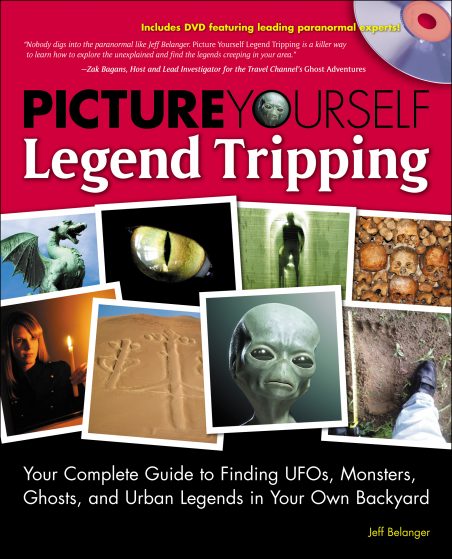 “Nobody digs into the paranormal like Jeff Belanger. Picture Yourself Legend Tripping is a killer way to learn how to explore the unexplained and find the legends creeping in your area.”
-Zak Bagans, Host and Lead Investigator for the Travel Channel’s Ghost Adventures

What is Legend Tripping? There’s a good chance you’ve already done it. Remember sneaking off into that cemetery at night as a kid to see if there were any ghosts? Remember hearing there was a monster lurking in that old abandoned building and wanting to check it out? Or hearing about a UFO landing site and wanting to plan your next vacation in the area so you could stand where the craft was said to have left its mark? That’s legend tripping. But it’s so much more.

Any television program you’ve ever seen that explores haunted places, ancient mysteries, UFO sightings, or strange creatures is legend tripping. First there was a story: a legend that was born and grew because people had unexplained experiences and shared what they saw, heard, and felt. In Picture Yourself Legend Tripping, you’ll learn how to find, explore, and document these amazing, and often paranormal, occurrences.

Don’t worry, you don’t need thousands of dollars’ worth of equipment, you have everything you need on you right now. And you don’t need hundreds of hours of training, because this book will show you how to have an incredible adventure in your own backyard this weekend. Bring your open mind and your sense of wonder. Get ready for legend tripping!

What Others Are Saying About this Book:

“As you adventure out on those weird journeys of life, one could not ask for a better tour guide along the way than Jeff Belanger. Jeff’s grasp of intriguing bits of bizarre information are delivered with a wonderful combination of knee-slapping humor and incredible factual knowledge. You can’t go wrong when you take Jeff with you on your next trek, whether it is a casual vacation or an intensive investigation.”
-Loren Coleman, author, cryptozoologist, director of the International Cryptozoology Museum

“Any serious paranormal investigator, really anyone who spends time looking into the unusual and unexplained, must eventually start to realize the close connection it has with legend. Too often the technology trending of modern investigation looks to strip away these connections to gain some truth, often at the risk of trampling real universal truth, In reality truth and legend are only different colors being used to paint the same picture, and the smart investigator must learn to view them together while celebrating each for what they are. Jeff Belanger is just the kind of guide to help people gain that focus.”
-Christopher Balzano, author of Picture Yourself Ghost Hunting