Jeff Belanger is a premiere storyteller and speaker on legends and lore. Jeff brings a suitcase full of evidence, a multimedia presentation, over 20 years of experience, and a lot of personality to the subject of the unexplained, making it both entertaining and accessible to a wide audience. 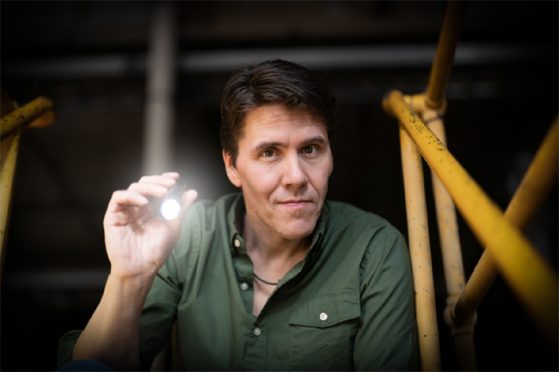 Jeff provides more than 80 live performances per year. You can see his upcoming events here, and he has received dozens of testimonials from past venues.

He also has the lighting, equipment, home studio, high-speed Internet connection, and experience to also provide his multi-media lectures and programs virtually. Venues can contact us to see a sample video of a recent virtual program.

In addition to being the author of more than a dozen books published in six languages, Jeff has been on countless radio and television programs discussing the topics he explores. He’s lectured at many conferences, libraries, colleges, universities, and other functions around the world. He was featured in the 100th episode of Stories from the Stage on PBS, he’s given a TEDx talk in New York City, he spoke at MENSA’s national conference, he’s an Emmy-nominated television host and producer, and a popular podcaster.

Some of Jeff’s lecture topics include (all are available as in-person or remote): 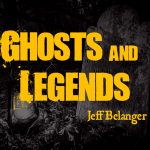 Drawing from a well of dozens of stories, this program changes every time it’s given. For over 20 years, Jeff Belanger has been exploring the unexplained. He seeks out history, folklore, ghosts, monsters, and legends all over the world and in your backyard. His talk presents highlights from his own adventures, a look at the investigation process, and compelling audio and visual paranormal evidence. Not just focused on ghost stories, Belanger’s presentation will delve into the reasons behind the legends. Drawing from a huge library of locations, this program is different every single time it’s presented. Perfect for the Halloween season! 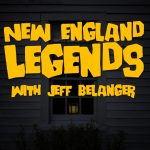 Based on Jeff’s popular PBS television show and weekly podcast of the same name, New England Legends offers a multimedia journey through the history, oddities, paranormal, and just plain weird side of New England. Jeff draws from hundreds of legends around New England, so this program is different every single time it’s presented, and is tailored to include stories from the region where the performance is taking place. 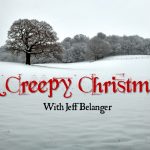 Based on years of research, and Jeff’s New England Legends Creepy Christmas television special, this program explore the  many Yuletide monsters and legends that have almost been lost to the ages. Jeff explores the history of the holiday and the ghostly traditions that date back more than two thousand years. Krampus, the Belsnickel, Tomtens, and who can forget the most famous ghost story of all time: Charles Dickens’ A Christmas Carol? “A Creepy Christmas” will make you believe again! This program is NOT suitable for a young audience. 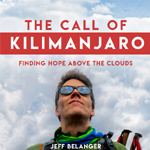 The Call of Kilimanjaro

After his brother-in-law Chris passed away, Jeff made the decision to take the trip of a lifetime, both in honor of Chris and in pursuit of clarity about his own life and goals. One of the famed Seven Summits, Mt. Kilimanjaro in east Africa has been on Jeff’s radar since childhood. Based on his memoir, The Call of Kilimanjaro: Finding Hope Above the Clouds, this performance offers a multimedia tour of Tanzania and the great mountain that has inspired so many. Spiritual, motivational, and uplifting, this program will take you up 19,341 feet to Africa’s highest peak and back home again. You can watch Jeff share part of his Kilimanjaro story on PBS’s Stories from the Stage. 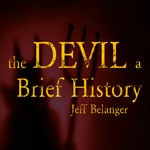 The Devil: A Brief History

The Devil has made his presence known throughout throughout the world. We’ve named thousands of locations after him, he plays a role in our religion and politics, and he’s been blamed for countless problems and disasters. But who is he really? We’ll explore the stories of where the devil has left his mark,  hear the folkloric accounts of him showing up in courtrooms and debates, and see the influence he still has over our lives through myths and legends. 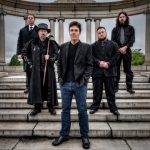 Featuring the eerie photography of Frank Grace. This is a theater production made for community theaters that typically hold 250 seats or more. This program also involves four other performers. This production is a celebration of ghost stories and legends set to the stunning and creepy photograph of Frank Grace. 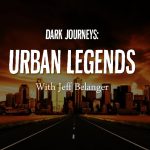 Bloody Mary, the Hook, White Lady ghosts, the weight of the soul, gravity hills, and so much more. Why do these legends pop up all over the world and force us to explore them? 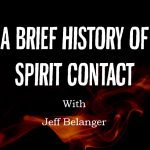 Are talking boards (aka Ouija boards) just a game? Can people reach the other side with automatic writing, through mirror gazing, by pulling out a camera or tape recorder? Jeff shows the method, discusses the history, and displays the evidence. 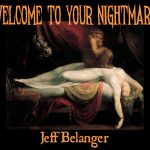 Jeff is the co-author of The Nightmare Encyclopedia: Your Darkest Dreams Interpreted. Learn about the paranormal in your sleep, what your dreams mean, and the symbols and archetypes of our dream world.

Jeff will tailor a program to fit your organizations’s specific needs. With photographs and images, audio and video clips, and a crypt-full of history and experiences from all over the world, the unexplained always packs in an audience — and Belanger knows how to deliver a riveting program.  Check out the dozens of testimonials from his previous programs.

Ready to Get Started?