Chasing Spirits: The Building of the Ghost Adventures Crew by Nick Groff with Jeff Belanger 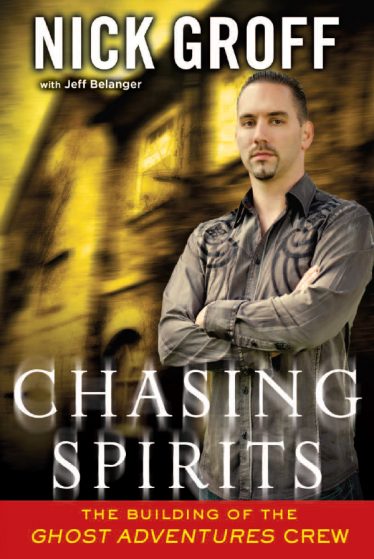 Take a look behind the scenes of the Travel Channel’s hit show Ghost Adventures with paranormal investigator Nick Groff as he shares his favorite explorations of the supernatural. From recording strange voices during his dusk-to-dawn lockdowns at “haunted” places to a face-to-face encounter with a spirit at Linda Vista Hospital in Los Angeles, Nick reveals an inside perspective of some of the most mind-blowing incidents caught on camera, a closer look at some of the gadgets and gear used in the show, and the friendly and competitive camaraderie among the Ghost Adventures crew—on the set and off.

Chasing Spirits also invites you into Nick’s haunted past, where a childhood near-death experience, an energetic passion for life, and a love of movies fueled his imagination and curiosity about the afterlife and started him off on his paranormal path. That path combined his interests in a documentary on ghosts that would eventually launch the Ghost Adventures television series and phenomenon. Everything Nick has witnessed and done has convinced him of the reality of the hereafter and inspired him to improve his personal and professional relationships and to continue to learn what it means to be a human being on a spiritual journey.