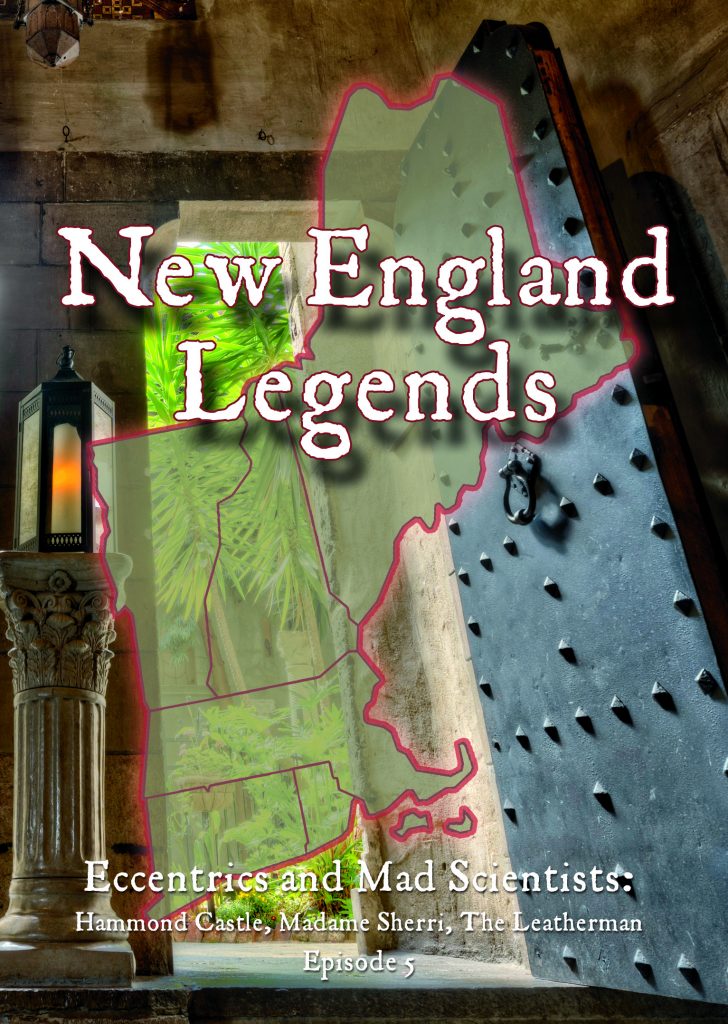 SPRINGFIELD, Mass. – October 19, 2016 – New England is full of ghosts, monsters, and other mysteries that are more than just campfire tales. These legends and lore are as much a part of New England History as are the famous ancestors whose names grace our towns and schools today. Just in time for Halloween, WGBY in Springfield, Massachusetts, and Vermont PBS will be broadcasting the series including “Eccentrics and Mad Scientists”—the latest episode of New England Legends.

In “Eccentrics and Mad Scientists,” Belanger explores Hammond Castle in Gloucester, Massachusetts. Once the home and laboratory of famed eccentric inventor, John Hays Hammond Jr. who was known as “The Father of Radio Control,” viewers will see where Hammond lived a storybook life inside his castle by the sea. Hammond was known to pull pranks on his guests, he held séances so he could study psychic phenomena, and he built a fascinating home worthy of his reputation. The episode explores the passageways, the unique architecture, and the man who built it. From Gloucester, Belanger travels to Brattleboro, Vermont, to explore the story of Madame Sherri and her nearby Castle Ruins—the allegedly haunted forest where Madame Sherri once threw decadent and lavish parties for her New York friends—but are there still echoes from the past coming from those stone ruins? From the woods of New Hampshire, viewers will head to a Connecticut cave where the Leatherman once took refuge. This vagabond spent decades traveling an endless route between the Hudson and Connecticut Rivers sleeping in caves and barns. But who was he and why did he do it?

“It’s the eccentrics who often leave the greatest mark on our landscape and lore,” said Host and Executive Producer Jeff Belanger. “These people pushed boundaries, and we remember them for it. Sometimes their accomplishments are only eclipsed by their unique behavior. In this episode, we wanted to celebrate some of the people who have stood out.”

New England Legends is a joint venture between Jeff Belanger and Tony Dunne. The two have been working together since 2009 when Dunne wrote and produced the documentary Things That Go Bump in the Night: Tales of Haunted New England for PBS. Belanger was featured prominently in that first documentary, which went on to national acclaim.

“With ‘Eccentrics and Mad Scientists,’ we’re taking this series to a higher level with better story-telling, camera work, and editing,” said Director and Executive Producer Tony Dunne. “We want to show New Englanders some of the history and places they may not hear about in school, but is a part of all of us nonetheless.”

Belanger and Dunne are currently working on future episodes of New England Legends and are actively seeking sponsorship to turn the program into a regular feature across more New England PBS affiliates. The New England Legends series has been nominated twice for an Emmy under the “Magazine Program/Special” category.

About Jeff Belanger
Jeff Belanger (www.jeffbelanger.com) is a New England native, author, adventurer, and one of the most visible and prolific explorers of the unknown out there today. Since 1997, the journalist has interviewed thousands of eyewitnesses to unusual occurrences. He’s the author of more than a dozen books on the paranormal (published in six languages) including the best sellers: The World’s Most Haunted Places, Weird Massachusetts, Our Haunted Lives, and Who’s Haunting the White House? (for children). He’s the founder of Ghostvillage.com, the Web’s most popular paranormal destination according to Google.com, and a noted speaker and media personality. He’s also the host of the cable/Web talk show 30 Odd Minutes, which is available in over 9 million homes in the United States. Belanger has written for newspapers like The Boston Globe and is the series writer and researcher for Ghost Adventures on the Travel Channel. He’s been a guest on hundreds of radio and television programs including: The History Channel, The Travel Channel, Biography Channel, PBS, NECN, Living TV (UK), The Maury Show, The CBS News Early Show, FOX, NBC, ABC, and CBS affiliates, National Public Radio, The BBC, Australian Radio Network, and Coast to Coast AM.

About Tony Dunne
Award-winning television producer Tony Dunne has called New England home his entire life. After studying film and television production at Emerson College and the University of Massachusetts, Dunne has spent the past 15 years working as a producer in news, commercial, independent, and most recently public television at PBS honing his storytelling skills. He has produced magazine programs, nightly newscasts, quiz shows, lifestyle and health programming, as well as the nationally-distributed documentary Things That Go Bump in the Night: Tales of Haunted New England for PBS.

About New England Legends
New England Legends is a partnership between Tony Dunne and Jeff Belanger. The series premiered in 2013 on PBS affiliate WGBY in Springfield, Massachusetts. In 2014 and 2015 the series earned a nomination for an Emmy under the “Magazine Program/Special” category. “Eccentrics and Mad Scientists” will air on WGBY Thursday, October 27 at 10PM, Saturday, October 29 at 7PM, and Tuesday, November 1 at 7:30PM; and on Vermont PBS, Monday, October 31 at 9:00 PM. For more information, visit: www.ournewenglandlegends.com