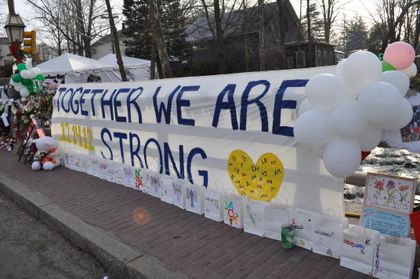 “I grew up in an old New England town…” You know how many lectures I have begun with those exact words? Each time some radio talk show host asks me how I got started in the paranormal, I start with those nine words. I’ve said them in that order thousands of times now. I say that phrase because it sets the stage that I grew up around historic locations and old buildings with tales of ghosts. I specifically say “old New England town” because nobody has ever heard of Newtown, Connecticut…

My heart broke completely on December 14th as I watched with the rest of the world as we learned the horrific details of the Sandy Hook Elementary School massacre. It hit me particularly hard because I’m a dad to a little girl who is only a few months younger than most of the victims, it struck me so profoundly because I went to Sandy Hook Elementary School in fifth grade and I felt like part of my childhood was attacked that day, and it hurt more because my family still lives in Newtown—the house I grew up in and where my folks still live is less than a mile from the school.

What has happened to humanity? What kind of monsters walk among us? How could something like this have happened? I asked all of those questions too. I’ve cried over this… a lot. I’ve felt rage and anger because of what happened. While the event was still unfolding that Friday morning, I was emailing and texting with local friends. “We have to do something,” was the tone of each of those messages. Something had to change. I had to change.

On the morning of Christmas Eve, I spent some time down at the makeshift memorials in Sandy Hook Center and by the firehouse. TV cameras and photographs did them no justice. There are a million details that could only be seen in person. The notes left in a child’s handwriting that said, “I hope you are okay,” the thousands of teddy bears, the cross made from Legos, the candles, the trinkets, the flowers, the toys, the hand-made Christmas tree ornaments that featured the victims’ pictures, the handwritten notes of support offered to anyone who read them, and the profound sense of sadness and loss that hung in the air. It took a community to create those memorials in a matter of days. Everyone was building something, though they didn’t know what or why. But it mattered. They did something. One little gesture, then another, and another turned into something powerful.

This is where it gets paranormal: intent is everything. You really can change your outlook, then the world, then the universe. It’s been proven again and again. I know it sounds daunting. I mean all of the baggage we all have from our past, and all of the trouble the future will no-doubt bring: bills, broken cars, bad relationships, horrible bosses, and so on. But we can focus on right now. I’m mean this second. We can easily change this second. It’s right in our hands, after all. It’s tangible.

New Year’s is a time for resolutions and change. I’ve found that any resolution with a start date other than right now has little chance of success. So right now, do something. Make a choice, and do it. Change this second, then another. You’ll inspire the person next to you to do the same. Slowly those seconds will compound and build something bigger and powerful—the same way those memorials were built in Sandy Hook Center.

Those emails and text messages I was sending on December 14th have turned into a new non-profit organization called the Newtown Memorial Fund, Inc. I’m proud to serve on the board of directors along with other locals who are volunteering their time to change the world around them. Our goal is to raise $26 million that will be used to assist victims’ families immediate needs, to build an appropriate memorial, and to establish a sustainable fund to provide academic scholarships in the victims’ names for generations of Newtown students to come. We’ve already raised over $450,000, but we still have a long way to go. I have no doubt we’ll get there, though. There are mountains to climb to get to that goal, but we’ll climb them one step at a time. To learn more, or to donate please visit: http://newtownmemorialfund.org/

The reason tragedies like the Sandy Hook Elementary School shooting hurt us is because we are all connected. There’s a fabric that binds one person to another, our past to our present, and our present to the future. It’s the same reason we sometimes know something before it happens, and why we feel emotions like love, joy, rage, and sadness. Because we tap into this global thing called humanity.

I hope and pray that 2013 will be a year filled with love, laughter, and more humanity than we have seen in a long time.