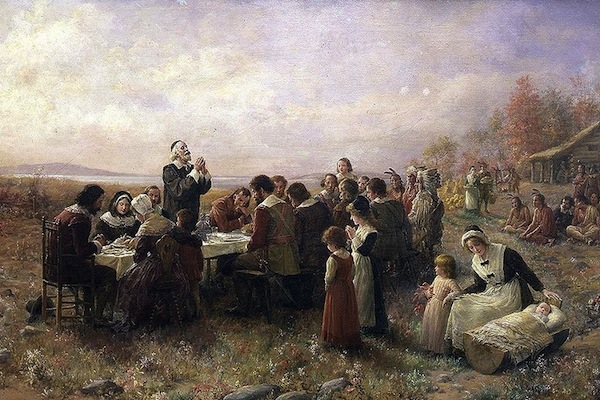 Recently a British men’s clothing company contacted me for a blog they’re writing. The objective of the piece is to explain to a Brit living in the United States what to expect from this uniquely American holiday. So they asked me to answer questions about how to be a good guest, what to wear, what to do if you’re hosting, and what the holiday means. Though they were only looking for short sentences to answer those questions, I went overboard and wound up writing an entire essay. Without further ado…

Thanksgiving is complicated. It’s been that way since 1621 when the local Wampanoag people first celebrated the harvest with the Pilgrims of Plymouth. I mean, that meal went okay, but soon after things got ugly with the whole smallpox-King-Philip’s-War-eradication-of-the-Native-Americans thing. But let’s focus on the positive.

This uniquely American annual meal happening on the fourth Thursday of November began back on November 28, 1782, when the United States Congress issued a proclamation calling for this day to be a national day of prayer and “Solemn Thanksgiving to God.” I’ve read the proclamation from top-to-bottom, and I’m afraid it will give you no insight into what Thanksgiving means today, so save yourself the time and skip it.

First, it’s pretty easy to score an invite to a Thanksgiving meal. It’s well-understood that no one should be alone on this day, so merely mentioning in passing around friends or coworkers that you have no Thanksgiving plans will guarantee you an invite by anyone within earshot. So choose wisely where and how you let that information “slip.”

“I’ve never been to a Thanksgiving dinner before. What does one do if he has no local family here in the States?”

Boom. Free meal. And usually a damn good one.

How to dress? Americans are a casual bunch, but dammit if this isn’t the one day per year we make some kind of effort. There are no ties or jackets required, but do go for a business-casual-meets-folksy look. A sweater (stop calling it a “jumper,” you’re in America now), slacks, and nice shoes ought to do it.

You’re likely to arrive mid-morning because this is an all-day affair, and dinner will be served early. You’ll watch at least part of the Macy’s Thanksgiving Day parade on the television (see also: “telly”)—a festival of consumerism and network program plugs that will serve as the backdrop to the start of your day. Each year the parade ends with Santa Claus bringing up the rear to remind you that you’re precisely 12 hours away from the manic holiday season and the infamous “Black Friday” shopping binge. But don’t worry about that just yet. You still have 12 hours to enjoy yourself.

What to bring? If you’re culinarily-inclined, bring either some kind of side dish or dessert. If your idea of cooking involves hot water and Ramen noodles, buy a good pie from a local bakery. Yours won’t be the only pie, so feel free to show your local colour (see what I did there? How I spelled “color?”); try and find mincemeat pie if you must, or go more traditional with apple or pumpkin. Also bring a bottle or two of wine. Anything that goes with turkey. If you want to get a little bold, maybe a red and a white?

With the parade over, you’re going to watch some football next. Not soccer. Football. With pads, helmets, and lots of yelling. If you don’t have a dog in the race, be a good sport and support whichever team your host supports. If your host is a rabid fan of one of the teams, DO NOT ask questions about how American football works during the game. Your genuine inquest will only be met with scorn. Just cheer when they cheer, and swear in disgust when they do. If the game is just background, go ahead and ask about offsides, on-side kicks, safeties, running backs, tight ends, two-point-conversions, encroachment, roughing the passer, and pass interference.

Thanksgiving is a time for friends and family, and family and friends are complicated. The table will be crowded with food and people. Remember, someone at that table voted for Trump. Others voted for Hillary. Stick pins in your Voodoo doll, sacrifice a chicken, and pray to God above that politics don’t come up during dinner, or this already-complicated holiday will get uncomfortable quick. Maybe bring up “Brexit.” No one will know what you’re talking about. It should be a safe topic.

In some families, it’s customary for the host to offer the guest the chance to say the blessing before the meal. Pray this isn’t the case for you. It’s always awkward. While, “Rub-a-dub-dub thanks for grub,” would work just fine in my house, better to go with some generic note of thanks to your higher power. Offer gratitude for the hospitality and friendship. Keep it short. Everyone is hungry.

National politics aside, you still have family politics to worry about. That’s a minefield you simply must walk as part of your Thanksgiving-rite-of-passage. And you never know what may trigger tears, yelling, or icy stares across the table. But you’re the guest, and your job is to change the subject should this Mayflower sail into dark waters. Movies, TV shows, the weather. Keep it safe.

If the turkey is dry, tell your hosts it’s delicious, but don’t overdo the lie. Everyone else knows it’s dry too. Rave about the cranberry salad or stuffing. If none of it is good, admire the table’s centerpiece and ask for the story behind it. Also take a mental note to find a different Thanksgiving invite for next year.

After dinner, offer to help wash the dishes. Your host will say no. Offer again. At the very least, help clear the table and pack leftovers. You’ll likely be taking some of these leftovers home. Say “yes” when offered—there’s more food here than one family can eat in a week. Plus, it’s every American’s God-given right to a turkey, stuffing, and cranberry sauce sandwich the following day. Don’t miss out.

If for some silly reason you’d like to host—don’t. It’s messy on so many levels. And if you’ve never cooked a turkey before, today is not the day to learn. Plus, you’re going to need your energy for shopping the following day. There are some wicked “door buster” sales that begin before dawn. And, might I add… you could use the exercise and distraction. Yesterday you consumed a week’s worth of calories and hours of family drama.

Thanksgiving is complicated, but it’s ours. It’s a day to pause. It’s a day to get together with family when otherwise we would not. It’s a day to bring in friends as back-up for our sanity. And we work through those tricky issues, both national and nuclear for the sake of a meal whose theme is centered on gratitude.

If all goes according to plan (a plan the 1782 Congress failed to lay out for us, thankyouverymuch), we part with hugs and laughter, with belts loosened, and with a perspective that maybe our friends and family ain’t so bad. For that, we’re thankful.

6 thoughts on “Thanksgiving is Complicated”