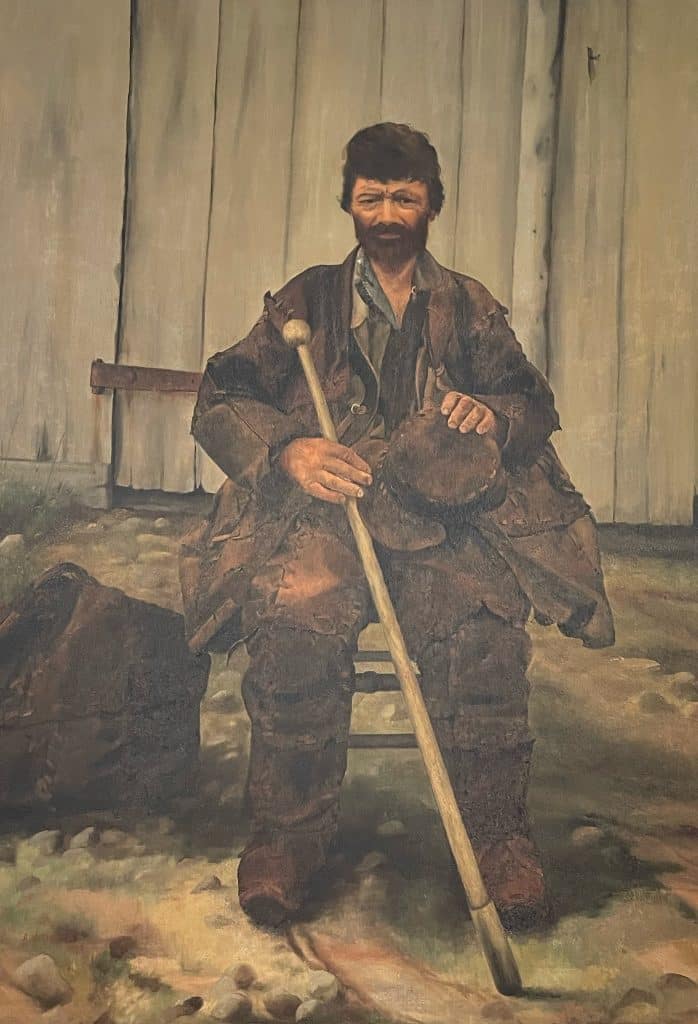 Last night I gave a program at the Derby Public Library in Connecticut. Before we got started, the director, Scott, showed me around the 120-year-old building. When he brought me into their History Room, he gestured toward this large painting and my jaw dropped. “That looks like Leatherman!” I said. And sure enough, it is. I’ve covered the story of Leatherman in my New England Legends television series, on my Web site, and I’ve been to multiple Leatherman caves in Connecticut. But I had only ever seen grainy black and white photos of the vagabond. Never have I seen the Leatherman captured like this painting.

The Leatherman was likely Jules Bourglay of Lyon, France. Jules had fallen in love with the wealthy daughter of a leather merchant. Her father at first objected to the match because Jules was poor, but then offered him a job in his leather business. Jules made a bad financial decision with the company that left them ruined. Disgraced and ashamed, around 1862, someone matching Jules’s description shows up in New England and started walking a loop between the Connecticut and Hudson Rivers. He’d walk about 10 miles per day, every day of the year in a 365-mile loop. He slept in caves or sometimes a generous person’s barn. The vagabond lived on handouts and sometimes did odd jobs. But he kept walking that loop until 1889 when he was found dead in Ossing, New York.

This was painted by A.V. Durand in 1892. It’s breathtaking, and so fitting that this New England legend is still with us in such a tangible way. If you’d like to see it for yourself, stop by the Derby Public Library, 313 Elizabeth Street, Derby, Connecticut.