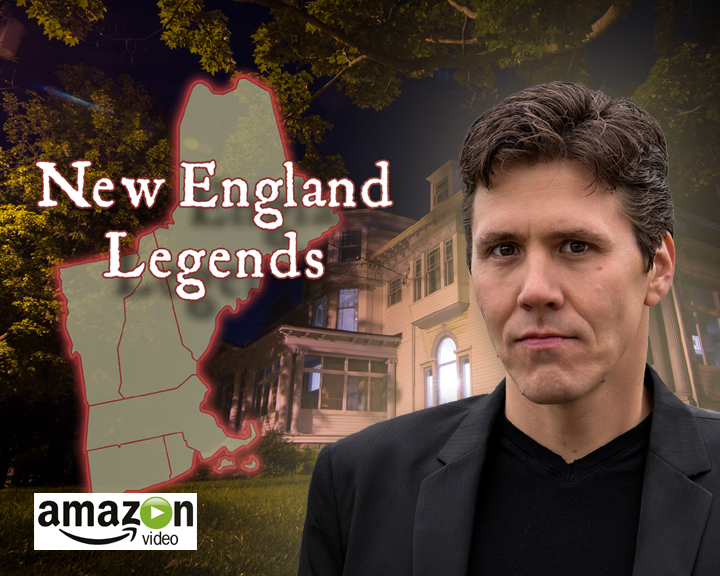 June 20, 2017 – Springfield, MASS – New England Legends, the television series that explores the strange history and unique folklore of the northeastern United States, is now available on Amazon Prime’s streaming video service. The independently-produced program, which first appeared on select New England PBS stations in October of 2013, can now be watched by millions of Amazon Prime customers in the United States, the United Kingdom, Germany, and Japan.

“We’re proud to bring our show to Amazon Prime’s massive audience,” said Jeff Belanger, host, writer, and executive producer of New England Legends. “People love these stories because they’re a part of the tapestry of our communities; the tales and experiences we whisper about around campfires, and offer us a direct link to our ancestors.”

Since 2013, five episodes of New England Legends have been produced by Jeff Belanger and Tony Dunne. The series was nominated for an Emmy Award in 2014 and 2015 after first airing on PBS. The episodes now available on Amazon Prime are:

Tony Dunne, director, and executive producer of New England Legends said, “New England is a special place, and it’s not just locals who are fascinated with our history and lore. We’re thrilled to now have our work available internationally, 24-7 on Amazon’s popular streaming service.”

In 2017, Belanger and Dunne also produced the documentary An Evening of Ghost Stories and New England Legends based on the stage show of the same name. Set to the stunning and eerie photography of Frank Grace, the documentary shows the performances and background to the annual stage production. The four storytellers featured are: Jeff Belanger, Carl Johnson, Andrew Lake, and Tim Weisberg. This documentary is also now available on Amazon Prime.

Belanger and Dunne are currently working on future episodes of New England Legends as well as other independent television projects.

About Jeff Belanger Jeff Belanger (www.jeffbelanger.com) is a New England native, author, adventurer, and one of the most visible and prolific explorers of the unknown out there today. Since 1997, the journalist has interviewed thousands of eyewitnesses to unusual occurrences. He’s the author of more than a dozen books on the paranormal (published in six languages) including the best sellers: The World’s Most Haunted Places, Weird Massachusetts, Our Haunted Lives, and Who’s Haunting the White House? (for children). Belanger has written for newspapers like The Boston Globe and USA Today, and is the series writer and researcher for Ghost Adventures on the Travel Channel. He’s been a guest on hundreds of radio and television programs including: The History Channel, The Travel Channel, Biography Channel, Reelz, PBS, NECN, Living TV (UK), CBS Sunday Morning, FOX, NBC, ABC, and CBS affiliates, National Public Radio, The BBC, Australian Radio Network, and Coast to Coast AM.

About Tony Dunne Award-winning television producer Tony Dunne has called New England home his entire life. After studying film and television production at Emerson College and the University of Massachusetts, Dunne has spent the past 15 years working as a producer in news, commercial, independent, and most recently public television at PBS honing his storytelling skills. He has produced magazine programs, nightly newscasts, quiz shows, lifestyle and health programming, as well as the nationally-distributed documentary Things That Go Bump in the Night: Tales of Haunted New England for PBS.

About New England Legends New England Legends is a partnership between Tony Dunne and Jeff Belanger. The series premiered in 2013 on PBS affiliate WGBY in Springfield, Massachusetts. In 2014 and 2015, the series earned a nomination for an Emmy under the “Magazine Program/Special” category and was a Silver Aurora Award winner in 2014. For more information, visit: www.ournewenglandlegends.com