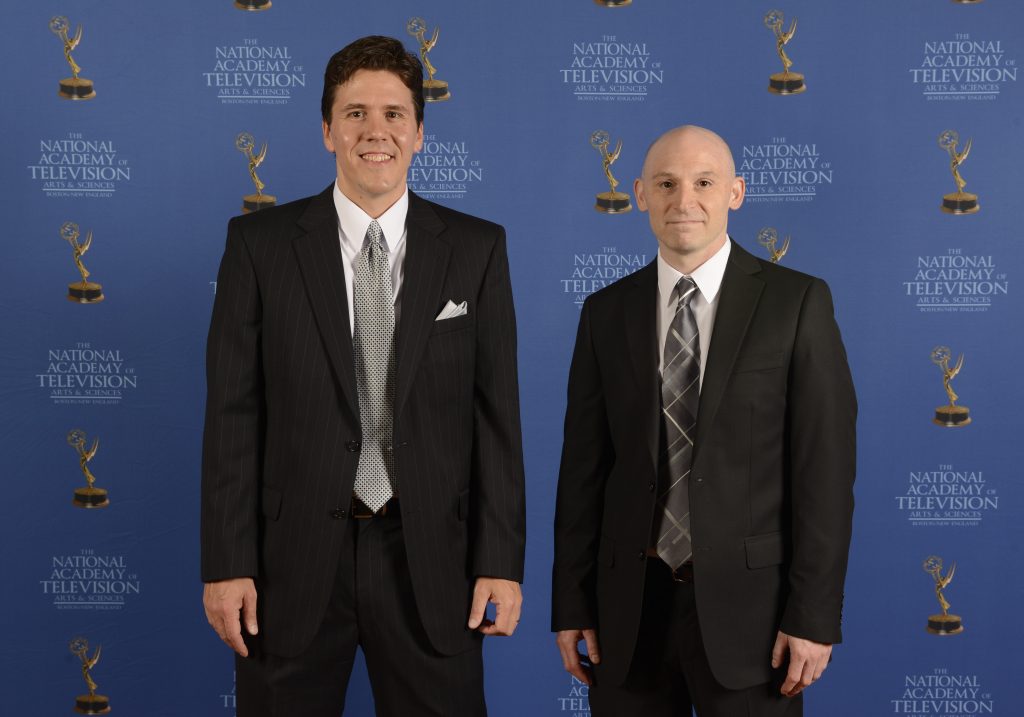 With me in the photo is my New England Legends partner, Tony Dunne. We were thrilled to be nominated for an Emmy for the very first episode of our show, and our hopes were high, but the night would not be ours. As our category came up and the nominees were read, my heart raced. It looked like a long walk to the stage. I had already seen other winners walk off holding that famous golden trophy, and I imagined what it would feel like in my own hands. Then the winner’s name came up, and it was not our production. We applauded the winner, we smiled… It stung like a sonofabitch.

Five minutes later, Leonard Nimoy took the stage to be honored. In his speech, he talked about how he had been nominated for an Emmy four times since he started acting on television at age 19. Four times he lost. He described how each time he lost he applauded the winner, smiled graciously, told himself it was about doing good work and not winning awards, and moved on. He said it’s not like he carried those losses with him all of these years… then he rattled off the names of the four people he had lost to. At age 83, he got to hold his first Emmy trophy… Saturday night in his hometown of Boston.

Mr. Nimoy said exactly what I needed to hear. This guy was an inspiration to me not just because I loved his In Search of… show as a kid, but because he kept doing the work his whole career. And did I mention I’m a bit of a closet Trekkie? So yeah, just as he’s warpping up (wow… Freudian typo… I meant “wrapping up”) his speech, he tells us all to keep doing the work, then he pauses, raises his hand into that sign he’s made internationally famous and says, “And my wish for you all is that you do indeed live long and prosper.”

That was it. I jumped to my feet. Thunderous applause. What a night! On the ride home, Tony and I brainstormed about all of the things we’re going to do better in our next episodes. That loss motivated me in a way that a win never could. I tasted blood, and I want to go back next year for more. When we produced our first episodes, we weren’t thinking about Emmy awards. We just wanted to make a good show. Knowing our first effort put us into that league… I know we can do better. Much better. And we will. I’m on it.

Jeff Belanger and Tony Dunne on the red carpet at the 2014 Emmy Ceremony in Boston.